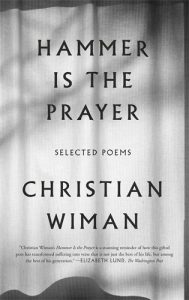 Christian Wiman holds one of a poet’s highest distinctions—that of writing the poems no one else could write before that poet came along. Like Hopkins, like Dickinson, like Rilke, Wiman is an originator of a mode.

This doesn’t mean, of course, that he has no forbears or influences. Wiman’s thought—even his theology—seem aurally guided. This makes for a particularly visceral, incarnate theology in which his religious faith is concomitant with his faith in art, in the human creative capacity. Most notable in this poetic tradition are the Metaphysical poets and Gerard Manley Hopkins.

Hammer Is the Prayer does—mostly—a good job showing Wiman’s development from a talented and careful young poet besieged by nostalgia, with a tendency toward portraiture, to the mature poet living literally at the brink of death due to a rare form of cancer, whose language and theology are wrenched tight to bursting.

Wiman has all along been drawn to sonic effects, including internal- and end-rhyme (often pleasantly “slant”) more frequent and in closer proximity than most poets dare today. In typically terse lines, the early poem “One Good Eye” begins, “Lost in the lush flesh / of my crannied aunt,” and goes on to recall the speaker’s aunt and uncle in lavish, keen-eyed detail:

… nodding
noisily off
like a parody
of people sleeping:
my aunt’s face crazed
with whiskery twitches,
her glass eye slitted
eerily open;
the unmuscled melt
of my uncle,
broad-skulled, flaring
forested nostrils.

In this early work, we see how Wiman makes the ordinary—even the ugly—sing and come preternaturally alive. The young poet takes it upon himself to probe and elevate the real, and does an impressive job of it.

There is a notable exception to the precision, skill, and metaphysical insight of Wiman’s early work, however. “Being Serious,” from his second book, Hard Night, is a very bad poem in a very fine book. It’s unfortunate that it’s so long (38 pages!). The protagonist of “Being Serious” is Serious—a satirical caricature, one senses, of the poète maudit. Serious is a misanthrope and a nihilist his whole life through. And then on his deathbed he is literally spoken to by God, who of course has never bothered speaking to Serious before, uttering the single word “Love.” And Serious dies with a smile that (somehow) becomes famous to the living who never knew or noticed him. It’s worse than a medieval morality play.

Take the book off your shelf, cut those thirty-eight pages out, and put it back in a place of honor.

Reading Hammer Is the Prayer, one major conclusion takes shape. Had Wiman not been diagnosed at a relatively young age with an incurable and potentially deadly blood cancer—and undergone its unpredictable vicissitudes and the consequent hospital stays, with treatments including immensely painful blood marrow transfusions—he would likely have remained a talented, even very good poet, drawn to traditional formal constraints executed in a contemporary idiom. But it’s clear that his illness blew open both his theology and his prosody. As a result, he has become more than a good poet; he’s become a superb one. Without his illness, he could not have written the greatest poems of his last two collections. The epigraph to Hammer Is the Prayer, from 17th-century poet George Herbert, seems to indicate Wiman’s own awareness of this reality: “I live to show his power, who once did bring / My joys to weep, and now my griefs to sing.”

Though Wiman’s griefs may have finally been brought to sing, that doesn’t mean he always felt they could, or that even now he understands why he had to endure so much grief for the sake of art. (“Song is not a salve,” he writes in “Lord Is not a Word.”) “After the Diagnosis” is a miniature allegory of Wiman’s own plight:

In “The Mole,” Wiman either remembers a loved one’s death or imagines his own, moving from “the onslaught / of insight”—the diagnosis—to death itself:

cures
crawling through him
like infestations,
so many surgeries
a wrong move
leaves him leaking
like overripe fruit.
[…]
[A] room
where voices grow
hushed as if
at some holy
place, and even
in the kindest
eye there lurks
the eternity
to which he’s been
commended
[ . . . ]
[A]s the last day
glaciers into his room,
glass and chrome
so infinites-
imally facet-
ed it seems
he lives inside
a diamond, he breaks
into a wide
smile, as if joy
were the animal
in him, blind,
scrabbling, earth-
covered creature
tunneling
up from God
knows where to stand
upright, feasting
on distances, gazing
dead into the sun.

Here we see instances of the powerful specificity and multivalence of Wiman’s verbs (“glaciers”—evoking slowness, immensity, and coldness at once), keen-eyed linebreaks (“so infinites-” highlighting the root infinite while simultaneously imitating the faceted glass and chrome by faceting the word itself; “up from God” breaking up the syntactic unit of an idiomatic phrase in order to sound multiple meanings), and his ability to make stock phrasing fresh by wringing it out for its most literal meaning (“gazing / dead into the sun”). Wiman does not depend on his trauma as a shortcut to poetic effect, but rather exerts pressure on language, compressing and chiseling it so that the end result is a striking, original, and memorable monument to his experience.

Over this body of work, we see Wiman not only learning to shape lasting poems out of his pain, but also shaping a theology that does justice to the difficulty of lived experience. His has become a poetry in extremis: “we are what we are only in our last bastions” (“Darkcharms”). So, for Wiman, suffering and desperation have, if not a purifying, at least a clarifying effect—they reveal the most essential self. And at some junctures there is very little self left at all:

For I am come a whirlwind of wasted things
and I will ride this tantrum back to God
until my fixed self, my fluorescent self
my grief-nibbling, unbewildered, wall-to-wall self
withers in me like a salted slug.
(“And I Said to My Soul, Be Loud”)

There’s something of Simone Weil’s theology here—the decreation of the self in order that God might enter this world through the space newly opened. Weil echoes in many places, in fact:

wind seeks and sings every wound in the wood
that is open enough to receive it,
shatter me God into my thousand sounds.

(“Small Prayer in a Hard Wind”)

Love is the living heart of dread

Love I love you unto the very edge of being

Often, Wiman lets language take the reins of thought, and is more willing than most poets of faith to let the results stand:

Wiman is more invested in theological statements that sound right or ring true than in conforming to any orthodoxy or tradition. I don’t mean that he has no theological precedents, but that it seems his ear is the ultimate test of what he’s willing to say about God. Implicit in this approach is the idea that the use of language is a means of broaching on metaphysical truths, and it can be trusted to do so when used in service of art and based on felt experience.

And yet, Wiman is also suspicious of the ways language can betray experience by beautifying, containing, or in his term, taming it:

My God my grief forgive my grief tamed in language
to a fear that I can bear.
Make of my anguish
more than I can make.

So, through language, Wiman believes that he can indeed make something, say something that contains at least a measure of truth—although it will always be incommensurate and imperfect. Anything more is beyond the purview of the poet and will have to be undertaken by God.

Wiman’s love of the music of language is evident even in his most tortured poems. One of his favorite, and most effective, devices is to create neologisms using Anglo-Saxon-style kennings: everair, shrivelcrippled, milkfeel, shindedying, paingleaned, stabdazzling, icequiet. And for all his theological bent, Wiman is not afraid to employ linguistic wit to express bitter irony about himself and the modern world in general, à la Franz Wright, as in lines from “Not Altogether Gone”: “his antic frantic penny-ante-Ahab stabs of madness” and “a refreshing stagger / through the fluorescent plains of Walmart.” He also brilliantly satirizes the tepid soup that so often passes for religion:

one more churchcurdled hymn
we don’t so much sing as haunt: grounded altos, gear-grinding tenors,
two score and ten gently bewildered men lip-synching along.
You’re up, Pastor. Bring on the unthunder.

(“The Preacher Addresses the Seminarians”)

Religion full of platitudes and unalloyed with the pain and difficulty of actual life is abhorrent to Wiman.

Wiman’s suffering has not caused him to lose faith, but it has caused him to redefine and remake it. And the resulting faith doesn’t seem to offer much comfort. After all, he knows what hells he might be asked to, yet again, endure. As he asks in “More Like the Stars,” “What rest in faith / wrested / from grief?” But he senses purpose in his restless, trial-proven faith nonetheless, and in the words wrung out to express it. Out of his griefs, Wiman has forged a song of unique musical ferocity and unflinching theological exploration. Despite his own suffering, however, his song is ultimately focused outward, with compassion and hope for others experiencing pain or spiritual darkness:

is that a mind